Here's What Happened When I Tried A Naked Yoga Class

‘I Tried a Naked Yoga Class, And It Was, Um, Quite The Experience’

"Without warning, the class shifts to the back and I'm suddenly at the front in downward-dog with my arse in the air." - by Suzanne Bearne 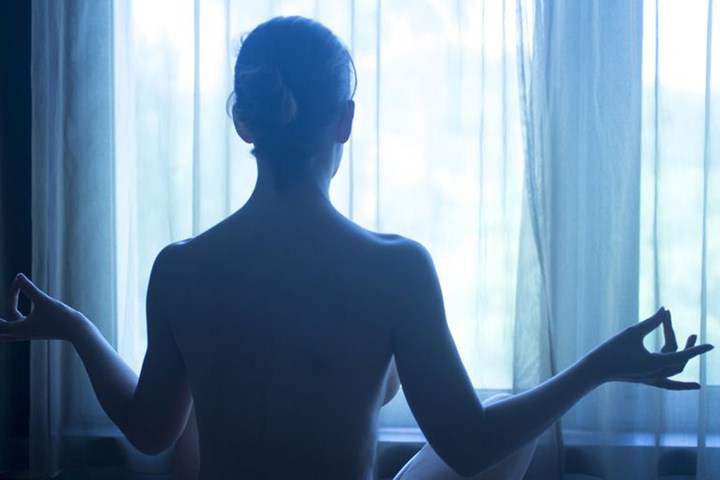 If you get an erection, you can move into child’s pose,” announces our yoga instructor Shelby as a group of us sit cross-legged on the candlelit 11th floor of a rather non-descript building in Chelsea, New York.

It may seem like a rather odd way to start such a spiritual practice, but not at Naked in Motion, where we’re all stark bollocks-and-breasts-hanging-out naked.

Believe me – I’m no extrovert, dying to be the centre of attention. But I am hungry for trying new things; whether that’s jumping out of a plane, moving to a new country on a whim, or agreeing to lead a three-hour masterclass when public speaking is your ultimate kill-me-now kind of fear. But when I clocked a naked yoga class during a recent spell in New York, it seemed so out of my comfort zone that… well, I had to sign up.

As yoga’s popularity has surged over the years, so too have the varieties on offer. No longer will a straight up hatha or vinyasa yoga suffice; instead the ancient discipline has evolved into ganja classes, goat yoga (yes it’s an actual thing, apparently) and, as it transpires, naked yoga.

And so that’s how this slightly nervous Brit comes to be grabbing a mat and rushing straight to the back of the room (obviously) in order to reduce the chances of one’s arsehole hogging the limelight. As women are given the opportunity to keep their knickers on, my initial intention was to keep at least part of my modesty in tact. But as Shelby encourages us to remove our clothes, it becomes apparent that the whole class (10 men; 4 women, if you’re wondering) plans to go completely nude. Not one to enjoy feeling left out, I find myself swiftly whipping off my bottoms, too.

After Shelby runs through rules – no cruising (staring at each other), asking someone out on a date, or stalking attendees online afterwards – the session follows your standard yoga class, with performances of popular poses such as mountain, tree and triangle. As my breasts hang free from the constraints of a sports bra and my vulva is on full show, my nerves quickly subside. But I soon realise it’s not my private parts that I’m particularly self-conscious about. Instead, it’s the protruding stomach. It’s the soft extra layer of spongey flesh around my waist that concerns me the most, even though absolutely no-one is looking, or gives a toss. Everyone is trying their damn hardest to avoid meeting anyone’s gaze, never mind checking out anyone’s body.

Saying that, I soon discover that my inner calm is probably very much due to where I’m situated – hidden away at the back of the class. Then suddenly, without warning, the class shifts to the back and I’m at the front in full on downward-facing dog pose with my arse up in the air. I cringe, my palms sweaty, until eventually, the group reverts back to its original position.

During the hour session, while I don’t entirely lose myself and forget I’m completely nude, my perilous feeling of, ‘oh god, I’m naked‘ does subside. I even begin to feel quite liberated to be out of my clothes and performing in my flesh, and pleased that I’ve pushed myself out of my comfort zone. Still, as we wrap up the naked yoga session and stretch, I do feel relieved to throw my knickers on before strangers start wandering around the room.

So what actually draws people to naked yoga? “I’m a pilates instructor so I’m always looking for what’s new in fitness,” says Kayla Gray, 23, from Ohio in the US, who was also attending Naked In Motion class. “At the beginning I felt self conscious and awkward, but I got into it and forgot about being naked. You focus on your own form as you’re in your own bubble.”

“There’s a very deep connection with your own body, which I had not experienced when practicing ‘regular’ yoga. Moving naked is completely different. There’s definitely a deeper connection with your body and breath. It’s a great boost in self-esteem: You learn to see your body, to look at it, and to accept it the way it is.”

Willow Merveille, owner and founder of Naked in Motion, says students report a whole range of benefits such as feeling a greater connection to their body and a greater freedom of movement without the restriction of clothing.

“Naked yoga, in particular, can help you develop a better relationship with your body simply because you can’t hide or avoid your body in a naked yoga class,” she says.

“I think people are terrified of their own bodies, of the things they perceive to be ‘flaws’, and of certain other people’s bodies. In this space, you have the opportunity to really see your body, the subject of one’s fear, anger, disappointment, and shame, and allow those feelings to be observed while you literally move through them.”

But she says there are limits. “Your insecurities aren’t all going to disappear after one class,” she says. “Acceptance comes with time, repetition and patience.”

As for me, the wheels are in motion to introduce naked yoga to my home town of Margate. Joking. As a not-so-natural yogi, I don’t think I’ll be signing up to do it again so soon. But of course, I’ll definitely keep my eyes peeled for another public naked activity.

This article originally appeared on Cosmopolitan US.