Fact Or Fiction? Do Periods Really Sync When Women Live Together

Fact Or Fiction? Do Periods Really Sync When Women Live Together

There’s nothing like going synching periods to forge the bonds of friendship, but is it really a case of pheromones or simply a coincidence? We look at the science. The female body is an incredible one and no matter how long you’ve inhabited it, it continues to surprise. While there’s much to celebrate when it comes to the female form, the monthly cycle isn’t always one of them. From the cramps (both in the stomach and the butt, no really) to the cravings and the feeling that you’re emotional state is a swinging pendulum that could see you snap at anyone and everything at any moment, periods can be quite the challenge. Not surprisingly, few things are more uniting that facing that first day of the cycle with your close friends or roommate. It means you’re no longer left to eat your feelings alone the couch, but can instead weather the storm with friends by your side, experiencing much of the same sensations and grievances when it comes to leakage and bloating.

Pop culture has long depicted powerful friendships as being those that see their periods synch and when it comes to reality, we want to believe that simply being in close proximity of our friends will lead to such cause for celebration. But is it really true? Or have we simply overlooked the science that suggests it’s more fiction than it is fact? Here we go deep into the myth of menstrual synching to uncover the facts.

Where did the menstrual myth originate?

The first idea of menstrual synchronisation stemmed from a 1971 study published in Nature which called it the McClintock Effect. It suggests that pheromones or other factors can influence and shift period for women who live together and was based on observations of 135 college students. In the time that has since elapsed, the study has come into great questioning. While there are a few that have published similar findings, many researchers who duplicated the study found there to be significant methodological errors in the analysis.

A 2006 study in Human Nature found that menstrual cycles don’t actually align reliably, even after a year of living together.

What is the pheromone effect?

A lot of talk surrounding the myth of menstrual synching rests on the pheromone effect. Basically, pheromones are chemicals released by animals that influence the behaviour of others of the same species. But while there’s evidence to support the effect in animals and insects, little evidence suggests it has any impact on hormonal behaviours amongst women. As obstetrician-gynaecologist Lynn Simpson, MD, suggests to Health Essentials, there’s little evidence to support the claim in humans.

“Pheromones are largely emitted from the armpits and the groin, but think about the habits of modern-day society,” she says. “Maybe there’s something there, but if you’re washing it all off when you shower, the pheromones aren’t going to have much effect.” 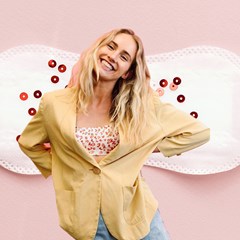 Young Australian of The Year, Isobel Marshall, Wants To Talks About Periods

Ok, but what about the moon’s phases?

Researchers have also suggested that phases of the moon can push a woman’s period to start earlier or later in the month. We already know that the moon holds some sway over ocean’s as it affects the tide, but as for what it can do for our menstrual cycle…the verdict isn’t out. As Dr Simpson notes, there’s no verifiable evidence to suggest it can affect your menstrual cycle.

So, why do our periods synch with friends?

While the evidence to suggest there is a scientific reason behind periods synching with friends is lacking, most put it down to one thing: time. If you consider someone who has a three week cycle living with someone who has a five week cycle, over time the periods will eventually coincide. However, the key thing is that they will diverge again.

As Dr Simpson explains, “It’s anecdotal that you’re likely to remember the times you had bad cramps at the same time your roommate did more than the times you didn’t.” She adds, “If you live with someone for at least a year, your cycles are likely to happen to occur together a few times.”

When it comes to factors that actually influence your period, consider things like birth control pills which alter the levels of progesterone and oestrogen in the body, extreme stress which can delay your period or bring it on earlier than expected, chronic illness and highly restrictive control over caloric intake.

Science might suggest the solidarity we experience when synching periods with friends is nothing more than a myth, but we’ll still take the camaraderie that comes with going through the menstrual cycle together.