The Ultimate Arm Workout For Building Your Guns

Get your guns blazing for a season of sleeveless outfits with this ultimate arm workout designed by Luke Zocchi – expert trainer on Chris Hemsworth’s health and fitness app, centr. Resistance training is a sure-fire way to build strength and improve posture. Using dumbbells will also help bring up the strength in your less dominant side, whilst giving […] Get your guns blazing for a season of sleeveless outfits with this ultimate arm workout designed by Luke Zocchi – expert trainer on Chris Hemsworth’s health and fitness app, centr.

Resistance training is a sure-fire way to build strength and improve posture. Using dumbbells will also help bring up the strength in your less dominant side, whilst giving your arms, back and chest better shape and tone. Try this workout on for size!

RELATED: 6 Moves That Will Tone Your Arms Once And For All

Move from side to side in a skating motion, bend at the hips and knees, touch one hand down to the opposite foot, transferring your weight to that foot and bringing the other foot behind it lightly touching down to stabilise the movement. Launch off the front foot, firing up those glutes to repeat the movement to the other side.

Start with feet hip width apart, hands together, bent over at the hips, upper arms pressed into knees. As you squat down with the legs, bring your chest up, so that your upper body is in a ‘prayer’ position at the top of the squat.

Begin in a ‘guard’ position, fists up near chin, elbows tucked in by sides. Jog on the spot bringing knees up high, throwing alternating punches straight out in front of you, bringing the hands straight back to the chin after each rep.

Get into a ‘bear crawl’ position, with feet and hands on floor, knees bent 90 degrees, hovering above the ground. Push the hips backward, stretching out the upper back, straightening arms then return to the starting position. Repeat.

Squat down to the floor, bend from the hips and place the hands on the floor just inside and ahead of the feet. Jump both feet backward, transferring weight to the upper body as you do so, then just them back to the squatting position. Be sure to keep your core switched on.

Let’s get everything firing. Hold dumbbells just above shoulders with palms facing, elbows facing forward, shoulders squeezed back and down, and gradually descend into a squat. Keep chest up, core engaged. From the bottom position, explode up, pushing the floor away and launching arms upward until you are upright with dumbbells in an overhead press position.

Time to get the guns firing. Stand with arms by side, palms facing inward gripping dumbbells hard, elbows held close by your torso. Curl both dumbbells upward, rotating  palms up to sky, squeezing until bicep is at peak contraction. Hold, then return arm to full extension. No half reps or resting at the top!

Let’s give those upper shoulders some shape. Start bent over from the hips, back straight, keep a slight bend in the knees, shoulders slightly rounded, arms extended in front of you toward the ground, palms facing. Slowly raise dumbbells out to the side with a slight bend in the elbow, until they reach about shoulder height, and return to start position.

Now we will focus on giving that chest some lift. Lay on the floor with knees up at 45 degrees, lower back in neutral position. Hold dumbbells above your armpits, with your elbows tucked under around 45 degrees. Squeeze your shoulder blades together, as if you were rowing and push them down toward your hips away from your ears. Try to keep them in this position through the entirety of the lift, it will create a slight arch in your mid/upper back. Push dumbbells up toward the sky, positioning them above your chest with arms locked out at the top, then return to start position.

This one will work your upper body, core and glutes if you stay tight! Begin with body locked out in a high plank position, arms straight, palms on floor, glutes and core engaged, slowly bring one forearm down to the ground at a time to a low plank position. Then keeping body in that strictly plank position ‘walk’ yourself back onto your hands. Repeat, this time bringing opposite arm down first. Be mindful to keep your hands and elbows positioned under your shoulders through the entire exercise, with shoulders pushed down away from your ears.

Let’s work on that posture. Position yourself in a split stance, leaning on your right hand on your right knee, knees bent around 90 degrees, chest up, back straight, shoulders back and down, gripping kettlebell in left hand  with arm extended downward directly below shoulder. Pull the kettlebell up and back toward your hip, keeping the elbow in close, opening up through the chest, then return to the start position.

Position yourself in a split stance, leaning on your left hand on your left knee, knees bent around 90 degrees, chest up, back straight, shoulders back and down, gripping kettlebell in right hand  with arm extended downward directly below shoulder. Pull the kettlebell up and back toward your hip, keeping the elbow in close, opening up through the chest, then return to the start position.

Something to tighten up the back of those arms! Position yourself between two kettlebells, shoulder width apart, with a hand on each handle, palms facing and legs straight out in front, or with knees bent (low option). Bring your collar bone up toward ceiling, shoulders down away from your ears, and lower your body to the ground by bending your elbows around 90 degrees. Return to top by straightening arms completely, focus on feeling the squeeze at the back of your upper arm.

Let’s work core stability while we work shoulder mobility. Hold kettlebell with two hands in front of your chest with elbows out about shoulder height, similar to the top of an upright row. Initiate the movement by moving one elbow upward and circling the kettlebell around the back of the head, keeping it and your elbows close to the body. Keep the spine in neutral and glutes and core on. Rotate back the opposite way after each rotation. 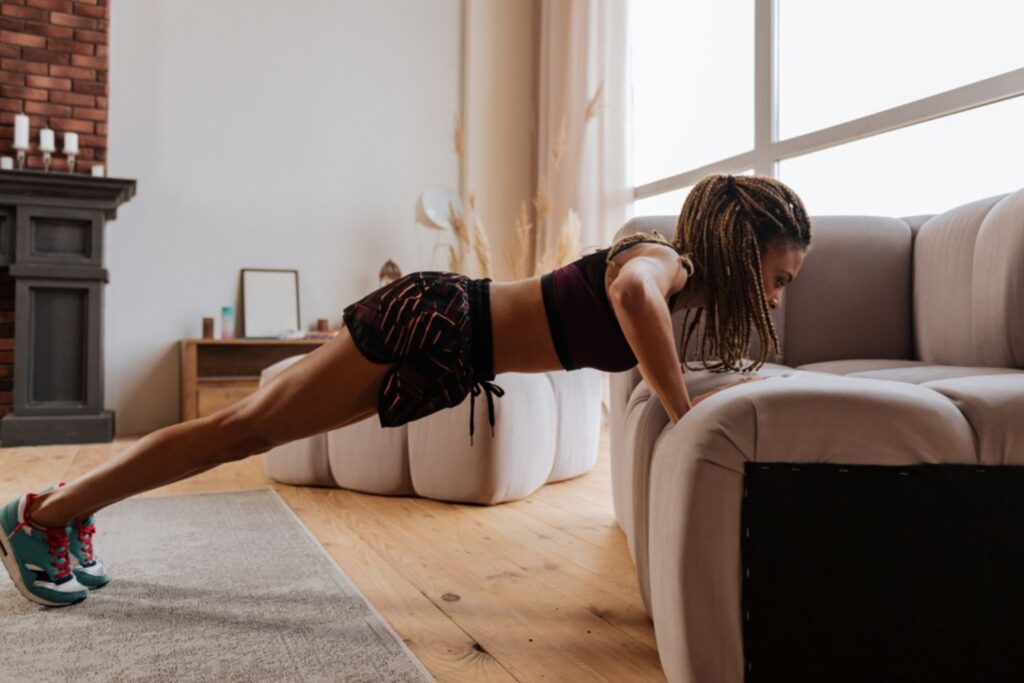 Struggling With Push-Ups? This Progression Workout Will Help You Master Them

Struggling With Push-Ups? This Progression Workout Will Help You Master Them

Love them or hate them, the push-up remains one of the most effective exercises.